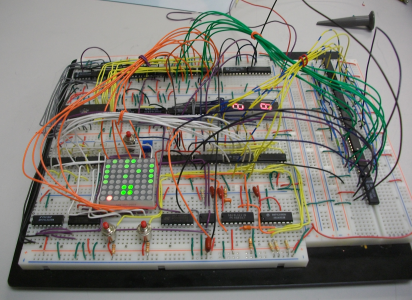 Picture of the final device.

The skier passes a row of trees every second. If the skier collides with a tree, the game is over. The player can avoid collisions and get more points by moving the skier left or right.

When the game is over or if the player scores 99 points, trees will stop moving, and the final score will keep blinking until the player starts a new game. Sound effects were also implemented in the game to signal a game-over.

I designed the digital circuits in EAGLE. Download a sample of my designs which did the display logic. 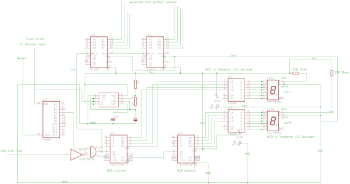 Schematics of the score board. I used EAGLE

This design was among the best 5 designs in the class and was probably the best well-documented project.