My team (composed of University of Massachusetts Lowell Solar Engineering graduate students) was asked by the Millstream Foundation to research the options and feasibility of installing solar electric capacity on their property in Chelmsford, MA, as a service-learning project in a UMass graduate course, 22.525 Grid-Tied Solar Electric Systems.

The feasibility study that followed was intended to be an initial assessment of the challenges, costs and considerations involved in solar electric installations as they apply to the Millstream Foundation property.  The electricity usage in the 2013-2014 year at Millstream Foundation property was 10,841 kWh.  Our goal was to meet 100% or most achievable fraction of the total power consumption with a solar PV system; future power consumption was expected to rise due to the foundation’s plan to open the facility as a museum.

Solar access of the site was measured by SunEye. I imported SunEye measurements into PVSyst to complete the shading analysis.

Using the National Electric Code (NEC) 2014 and detailed site measurements as a guidelines, we performed calculations to determine an optimum configuration of the solar PV system.  We recommended a rooftop system of 10.5 kW DC equipped with SunPower photovoltaic modules and Solectria inverters with an estimated production of 10,442 kWh AC in the first year.  While this is 96% of the load at the time, it does not account for future demand rise.  Therefore, a 100kW DC solar canopy could also be deployed to produce an estimated 114,400 kWh AC the first year.

Financing such a large project is the biggest challenge.  Millstream Foundation is a tax-exempt organization, so tax-related incentives (such as Federal ITC and state tax breaks) do not apply.  However, Solar Renewable Energy Credits (SRECs) turned out to be the key to financial feasibility of the project.

My role in this project was to ensure technical accuracy of the solar PV system design and documentation. In addition, based on my prior experience in the solar industry (at Solectria), 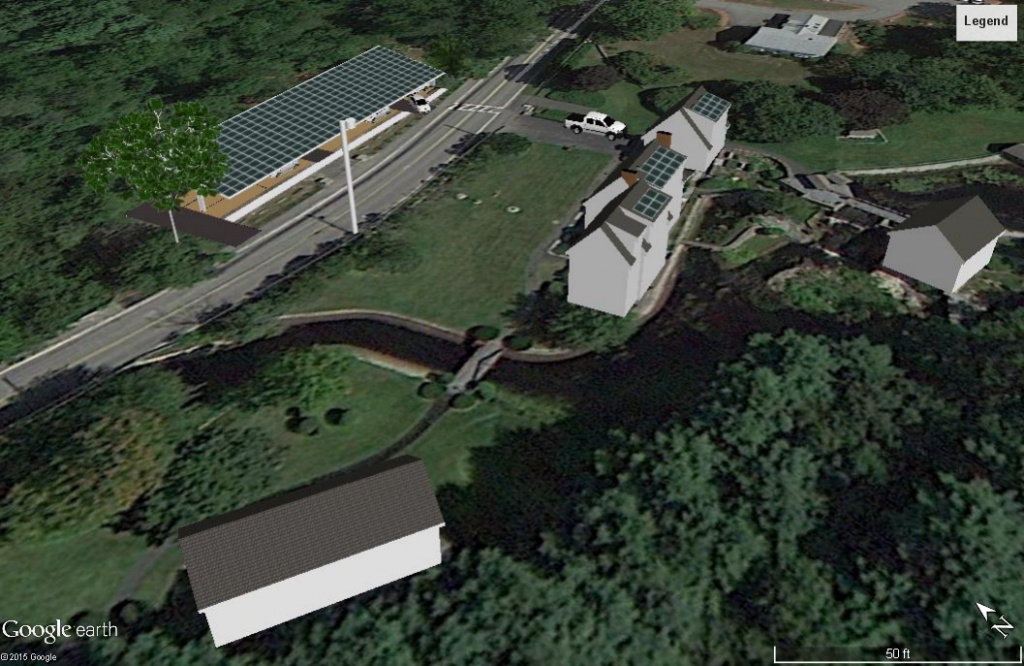 Solar farm for a client in Chelmsford, MA. I generated the image using Google SketchUp and Earth and Skelion extension. Firstly, I geo-located the buildings in SketchUp and then, secondly, I exported the 3D models to Earth.